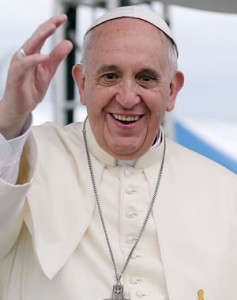 Pope Francis’ long-awaited encyclical Laudato Si’, subtitled On care for our common home, has been praised by groups as diverse as scientists, anti-poverty and climate justice organizations and governments, as well as by the Dalai Lama and other religious leaders. The encyclical was released to all Catholic bishops in May 2015 and can be read in full at w2.vatican.va  It is an astonishing document. As we might expect, it puts forward a strong moral defence for saving Creation. Climate-change mitigation has become a mainstream ethical response to the myriad assaults on life on Earth.

The Pope speaks passionately about the climate as “a common good, belonging to all and meant for all”. As our oceans, forests and rivers are under siege, so too is our very climate, which allows all life to flourish. Justice for all encompasses the right to have an Earth, our home, that does not look “more and more like an immense pile of filth”. Furthermore, he admonishes us not to be caught up in a one-dimensional understanding of technological progress: “This has made it easy to accept the idea of infinite or unlimited growth, which proves so attractive to economists, financiers and experts in technology. It is based on the lie that there is an infinite supply of the earth’s goods, and this leads to the planet being squeezed dry beyond every limit.”

The encyclical points to the growing inequality of wealth and wellbeing as a major contributor to poverty and an increasing source of concern in the fight for justice and care for our only home. “The earth”, the Pope reminds us, “is essentially a shared inheritance, whose fruits are meant to benefit everyone.” As billions of people are excluded from any kind of food security or housing, so too are they the ones who face migration in the face of severe climate events, he points out.

Although the Pope does not comment on the planet’s burgeoning human population as a major cause of increasing climate instability, his critical remarks regarding hyper-consumption, greed, and water and food insecurity, as well as unfettered growth, point to over-population as a key component entrenched in our global problems. He bids us protect “our common home”, which means making changes in how we understand the roots of poverty and the huge biodiversity/climate crisis now upon us. “We have to realize that a true ecological approach always becomes a social approach; it must integrate questions of justice in debates on the environment, so as to hear both the cry of the earth and the cry of the poor.”

The Pope tells us that “the ecological crisis is also a summons to profound interior conversion.” Our home is in jeopardy of being destroyed. We need to have an integral approach or ecology that embraces our common lands, our cultures, and people living in poverty. “I am interested in how such a spirituality can motivate us to a more passionate concern for the protection of our world,” the Pope explains. He asks us to educate young people and create a covenant between humanity and Nature.

Please see tinyurl.com/laudato-si-2015 for some of Pope Francis’ most interesting statements regarding our planet.

Pope Francis asks us all if we are doing enough to enshrine in government and ourselves a covenant of goodwill towards the natural world. Biodiversity, as the Pope states, is at the mercy of human intervention through a misled understanding of perpetual growth and hyper-consumerism. Inaction on climate has taken on strong ethical dimensions. Justice for the poor and justice for nature demands an empathic response immediately.